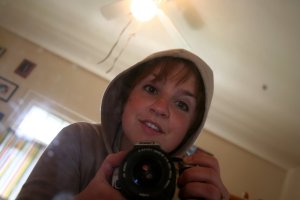 Who wouldn’t want to race around a marathon course taking picture of people?! Okay, I guess maybe a lot of people wouldn’t choose to do that on any given weekend, especially if it involved waking up 2 1/2 hours before sunrise, but I had an amazing time! And that what counts, right? ;o)

Anyway, I covered the GR Marathon this past Sunday, riding my bike around, interviewing cool people, and trying to figure out how to take pictures of thousands of moving bodies.

I am now a big fan of marathons. I almost want to run in one. But not quite.

I do, however, have a lot of admiration for those who do run marathons, and quite possibly even more admiration for all the staff, volunteers, and fans that make races the awesome experience they are. Running 26.2 miles wouldn’t be quite the same without row after row of people cheering you on, not to mention all the random stuff the runners get offered. Water, Gatorade, Vasoline, energy gel (?), mylar/space blankets, t-shirts, medals, chili, beer, the list goes on. [some of those items were offered during the race. some were offered after. just to clarify.]

And you’re super cool because you’re gonna be reading my story about the AQ team’s involvement in the upcoming issue of The Saint and the feature story I’m writing for Gemini about mTT next Spring! *PLUG*PLUG*PLUG*

Anyway, it was a fantastic experience, and I learned a lot about covering huge event like that. How sweet it would be to bi-locate, or freeze time for a few seconds while I set up the perfect photograph, or block out at least some of the noise so that the interviewee and myself can focus on our discussion. In retrospect though, all those challenges are a part of what make events like that what they are = EXCITING and AWESOME.

check out my pics on Picasa but please note, all shots are copyright yours truly only, at least until I figure out which ones are up for publication.