I know I’m not the only one who remembers VCR’s.  You know, those gigantic cassette tapes?  Oh wait, not everybody knows what those are either.  Anyway, I remember, back in the day, there were all these jokes about getting the flashing “12:00” to stop, in other words, figuring out how to program the time into this incredibly advanced piece of technology.  It was apparently quite challenging and made people feel inept and technologically-behind, thus providing easy comedic material.  You with me here?  On the same memory lane?

I have no idea if Blackberry Red Starbursts is an actual term.  I’m going to guess not.  Not until this point at least.  It is now, and will be referred to from this point on as BRS. 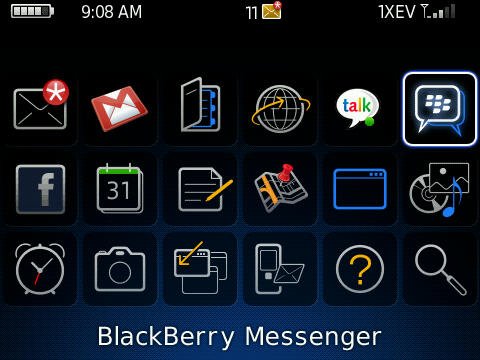 (said BRS can be seen in above image)

The BRS provokes an almost irrepressible desire in me to make it go away.  Why?  Because the BRS usually means that there is a message I have not seen, and an email waiting to be opened, a friend waiting to be accepted, or something else of great importance.  Take for example the above image.  ELEVEN unread messages?!?!?!?!?  OH. MY. GOD.  that is crisis mode indeed.  Stop everything.  Read those messages.  Make that BRS go away.

The problem comes when I cannot figure out how to do this.  Thus begins the flashing VCR tie-in.  Most social media apps have some sort of notification system that results in unread/new messages.  Once that app is downloaded onto my phone, the notification system results in, you guessed it, BRS.

Once I’ve downloaded an app onto my phone, it has a very short amount of time in which to convince me to keep it on my phone.  That means I need to be able to figure out how to use it and decide it’s cool and/or useful in some way in a couple minutes.  Apps that put BRS’s all over my screen that I can’t figure out how to get rid of don’t pass the test.

And so I do the equivilant of putting a black piece of tape over the flashing VCR time.  I delete the app.  Can’t be that important right?