I’ve already covered the fact that I no longer live in the ghetto.  I do not, however, live so far away that I don’t end up there quite easily.

Monday afternoon:  The autumn air is refreshingly crisp, I have a couple hours before work, I’ve been working at my desk for a good slice of the day: time to go for a run.  After some initial difficulties involving hiking my leggings up every other step, I get into the swing of the run and head off exploring some of the residential areas yet to be discovered.  At some point, I don’t believe the line is completely definable, I cross into the ghetto.

My first clue that I had crossed that undefinable line, was when I kicked a black version of the taco-bell 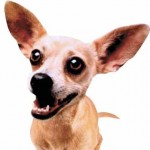 chihuahua half-way across the street.  Okay, that’s a lie.  I only kicked it a couple feet.  It was an accident, I swear.  I was running along, minding my own business and enjoying my own endorphins, when afore mentioned creature decided it was a good idea to chase me and consequently got tangled up in my feet.

My second clue that I had crossed into the ghetto was when the rat-dog’s owner did absolutely nothing.  Probably because she was a rather, eh, “big-boned” lady busy unloading the fried chicken from her car…

So I yelled at the dog to go away, and continued my run, soon to come across a young girl, apparently walking home from school, backwards.  When I first noticed her ahead I thought she was just saying goodbye to someone and then would turn around.  I was wrong.  I watched her walk backwards for a good block before I passed her.  She had the I-want-to-grow-up-and-be-a-punk-rockstar look goin on, so one can only assume that she was attempting to “be different” and embrace an “alternative” way of life.  By walking backwards.  Good for her.

Honestly, backwards-walking-punkster-girl doesn’t really have anything to do with the ghetto, per se.  I’m just betting I wouldn’t see that in Gaslight Village.  It’s probably quite entertaining, walking backwards, between the odd looks you’d get and never knowing what’s next.  I hope she made it home without running over any chihuahua’s.