My happy Friday morning thoughts were going quite nicely, fueled by that precious first cup of coffee, you know, the one that tastes better than any coffee that you drink for the rest of the day.  I was scrolling my various “feeds”, as is my morning habit, when I began to notice strange words…  “shooting” “movie theater” “12 dead”…. Wait, WHAT? 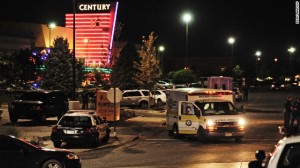 As all of the internet/society must surely know by now, there was tragic shooting at a midnight showing of the latest installment in the Batman series.  It took place is Aurora, Colorado, and 12 people were killed, with many other suffering injuries and everyone involved experiencing un-imaginable trauma and terror.   The “raw-est” of interviews was this one, from ABC: abcn.ws/NGyEac   After that, I simply could not bear to watch anything else.

In the midst of all the emotion, sadness, and shock, I realized I was experiencing something else, an annoyance bordering on anger towards all the news websites that I visited.  Since the news was considered “breaking” for all of Friday, the majority of the content provided by the site was freshly uploaded video.  However, before you could watch the clip, you are required to sit through a 30 second commercial.  Really?  We need to watch commercials before we learn about this terrible tragedy???

To me, advertising on websites instantly translates to one thing: profit.  How twisted is it, that news stations are profiting off of this violent tragedy via the advertisements that they place on their site?  A quick look at google trends, twitter trends, or any similar trend reporting site will show the this was one of the most searched topics on July 20, translating into high traffic to news websites.  It seems borderline sadistic to then force concerned and grieving citizens to watch advertisements full of smiles and happy puppies for thirty seconds before cutting to interviews of clearly traumatized victims and families.  How is a person supposed to respond to that, or even process that stark juxtaposition mentally and emotionally?  It is jarring, at best.

Obviously, this is not new.  News stations profit from terrible news all the time.  If it bleeds, it truly does lead.  I have a distinct memory from one of my internships of sitting in the control room with producers as we watched a live feed of a runaway train.  The producers actual sat there verbally hoping for a crash while the disillusioned intern watched on.  Bad news gets attention, good coverage of it gets ratings.  If news companies are able to profit from society’s sick curiosity, they do.

For whatever reason, it especially bothered me today.  I’m not sure if it was the inappropriateness or the inconsiderateness of it, but regardless, I think that pages dedicated to covering breaking news surrounding tragic events should not have video advertisements play before the news clip.

My former, idealistic self is apparently not completely dead.  No one should profit from human loss and tragedy, ESPECIALLY in a way as obnoxious and disruptive as mandatory video ads.

Waiting to see ABC et. al get my memo,

***Prayers and thoughts to all affected in this tragedy***