I didn’t respond right away when Trump’s latest scandal hit the airwaves, mostly because I didn’t find it surprising for two reasons:

1 – Trump showed us what kind of person he is a long time ago; this is par for the course.

2 – Women, and men, are subject to this sort of sexual, abusive, and wildly inappropriate language all the time. It’s called “rape culture” and it’s unfortunately VERY pervasive throughout the world.

I am more concerned with the many responses that I have seen. Here are some thoughts based on the various reactions I’ve seen over the last several days:

If we value human life, as so many like to proclaim, it doesn’t matter if you are a woman, know a woman, are married to a woman, or have offspring that happens to be a woman. This is not okay. If you insist on using, “as a white politician with a wife and daughter, I find this offensive” type of logic, please broaden your frame of reference a bit to include other humans in other scenarios. I like how Chris Hayes put it:

This is a symptom of issue that is terrifyingly pervasive in today’s society. I’m grateful that so many people are talking about rape culture as a reality, but let’s take a moment to recognize where else this sexual abuse is happening, outside of the presidential race, every day. If it’s outrageous for a presidential candidate to say, shouldn’t it also be outrageous for classmates, coworkers, bosses, family members, friends, strangers…? I get that the stakes are a bit different, and yes, global leaders should be held to a higher level of scrutiny, but this is not an isolated instance. I cannot tell you how many times I have heard similar, or worse, commentary towards women (including myself) because it’s simply too many to count. “Locker room banter” is the norm, and nobody, man, woman, or child, should be okay with it.

What is more terrifying to me than one man making these terrible “grab em by the pussy” remarks, is the swarm of support that he has received in the aftermath. But again, back to my first point, we have seen Trump supporters showing their true colors from the start, so this isn’t all that surprising. My issue is more with how they are pointing out others who have said or done worse as a way of justifying Trump. I know my highschool rhetoric and logic class was an awful long time ago, but I’m pretty sure that’s a logical fallacy, i.e. using somebody else’s wrong doing to make something else that is also wrong seem okay…

But of course, our society does not place much value on sound logical reasoning these days, so here’s my point: Abuse by people in power is a very real thing. [Women have been posting their own stories at an alarming rate in response to Trump’s comments all over the internet. You can see some for yourself HERE] It does not matter if they are president, running for president, a policeman, coach, teacher, boss, priest, boyfriend, spouse, popular kid in school, whatever. It doesn’t even necessarily matter if they use the words “fuck” or “pussy”. What matters is the attitude that they somehow have the right someone’s body for the purposes of their own pleasure or satisfaction, and, in this instance, that they are bragging about how their position of power makes this sexual assault easier for them, thus perpetuating the problem even further. 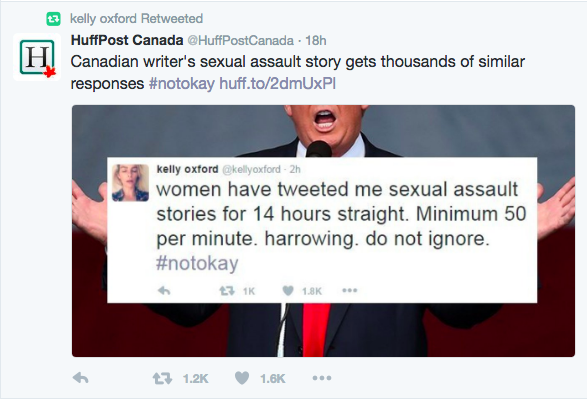 It takes all of us to change this. We must decide to treat each other with respect and hold offenders responsible when that respect is not given. Anybody who has ever managed to squeak out a “hey, that’s not appropriate” or a “come on, don’t talk about/to me/her/him that way” knows how terrifying and hard it can be, especially in certain work or social situations. But, just like we are trying to teach our kids to speak out against bullying in schools, we must also teach each other to speak out against sexually abusive language.

Speaking from personal experience, it gets easier with practice, and even easier when you know people have your back.

The presidential election is a surreal backdrop for this conversation, but that aside, we’ve got work to do. I’ve got your back, do you have mine?

One thought on “Presidents, Pussy, & Rape Culture – We’ve Got a Big Problem”